There's a first time for everything and this is the first time that bacon has ever featured on this blog (and any of my published work for that matter).

How did I end up creating a recipe with it?

I researched, trialled and spoke with leading experts to comprehensively understand the controversy that exists and secondly, I ate some damn good bacon which pretty much changed my life.

Have I mentioned that I grew up with a predominantly vegetarian diet?

Maybe because of this (and my limited tastebuds), bacon just never appealed to me. The quality and cooking techniques of this meat are atypically of very poor standards so you can't blame me for my lack of interest then right?

Why do we hate bacon?

Let's face it, Jewish or otherwise, the general perception is that pigs are filthy however I've never subscribed to this thinking and additionally I feel the people that say so often do so right before chowing down on pork crackling or ham; you do know that it's the same animal right?

Bacon and ham, it would seem cop the majority of flak within the pig controversy and this is due to the common inclusion of sodium nitrate in their processing.

Sodium nitrate and sodium nitrite are salts used in curing or preserving meat and fish. Sodium nitrate is a naturally occurring mineral that exists in a variety of green vegetables whereas sodium nitrite is derived from sodium nitrate and is the compound that actually contains the antimicrobial properties that are desired in the production of bacon. This synthetic product also provides the characteristic pink color and typical flavour to the finished product. 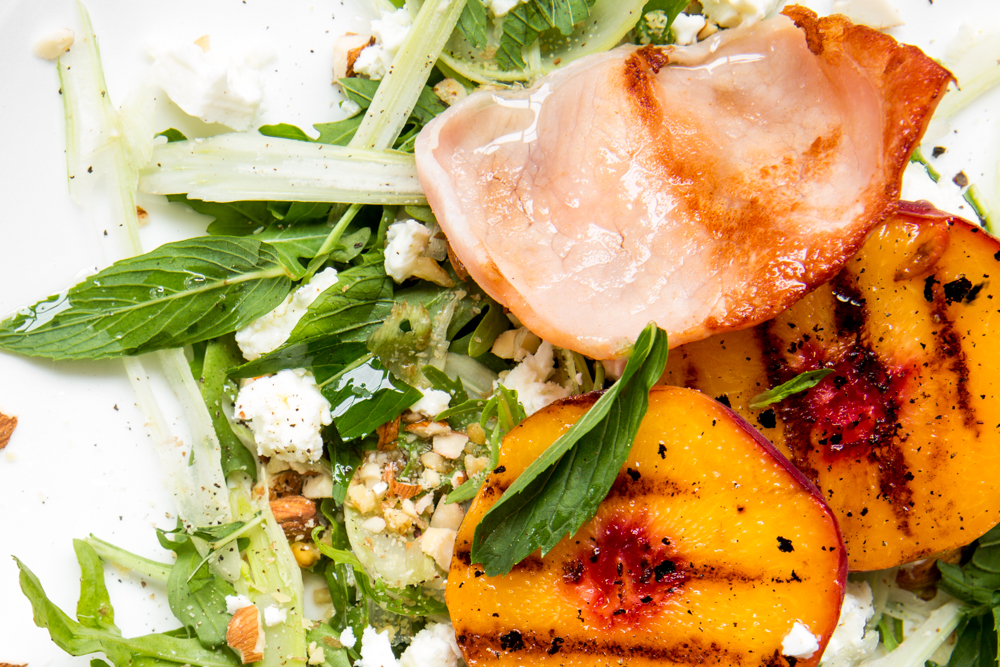 Why is it a concern?

In higher doses nitrates are also used as fumigates to kill rodents and these nitrates can leach into the soil, contaminating the food supply. While much smaller amounts are directly used in some prepared foods, there are health concerns related to sodium nitrate.

The controversy rages though there is a whole heap of established studies linking the consumption of it to cancer and therefore regarding nitrate as a carcinogenic. Many countries limit the amount allowed in food production, though it should be noted that not one has conclusive evidence about what is a safe level of consumption.

As I mentioned, nitrates exist in green vegetables, and in fairly large quantities at that.

When we consume dietary nitrate our body converts it into nitrite, which increases nitric oxide in our blood stream and helps lower blood pressure. When those green vegetables react with our acidic gastric juices, nitrosamine is created in the body, however, those vegetables also contain antioxidants, which keep nitrosamine production in check. Nitrosamines are also created when sodium nitrite is heated to a particularly high temperature.

Many studies state that you would need be consuming a lot of bacon (with nitrate) to feel the negative effects and they also discuss the avoidance of burning the meat, to once again limit the amount of nitrite entering your system.

So by selecting nitrate-free bacon (and other smallgood products) what am I really getting?

In the absence of synthetic sodium nitrate, the manufacturer still soaks the meat in a brine to prevent botulism and to provide a recognizable flavor to the meat. However a natural type of nitrate is used; found in celery powder or juice and sea salt which obtains a similar bacon taste without using potentially harmful chemicals such as sodium nitrite.

First and foremost, I believe in eating simple, seasonal and high-quality wholefoods, welfare-focused and premium animal products, as well as creating recipes for you that reflect those same principles.

I also believe that for myself (and so many of the population), a predominantly plant-based diet is ideal for the body and mind; it's what we thrive on. Products such as bacon, to me are an indulgence and a small one at that.

Although not a scientist who has seen every side of this controversy, I feel strongly that man-made additives are rarely a good idea; especially in the food world. How Nature made it is pretty damn good and this same motivation leads me to source organic and un-modified food as much as possible (a 2015 manifestation for me).

If you're asking for my recommendation, I encourage you to indulge in specialty products, such as bacon, in small quantities and from the highest-quality source (without synthetic nitrate) and complemented with a good dose of seasonal fruits and vegetables. That way, the increase in cost is a non-issue too (because I knew that one was coming). 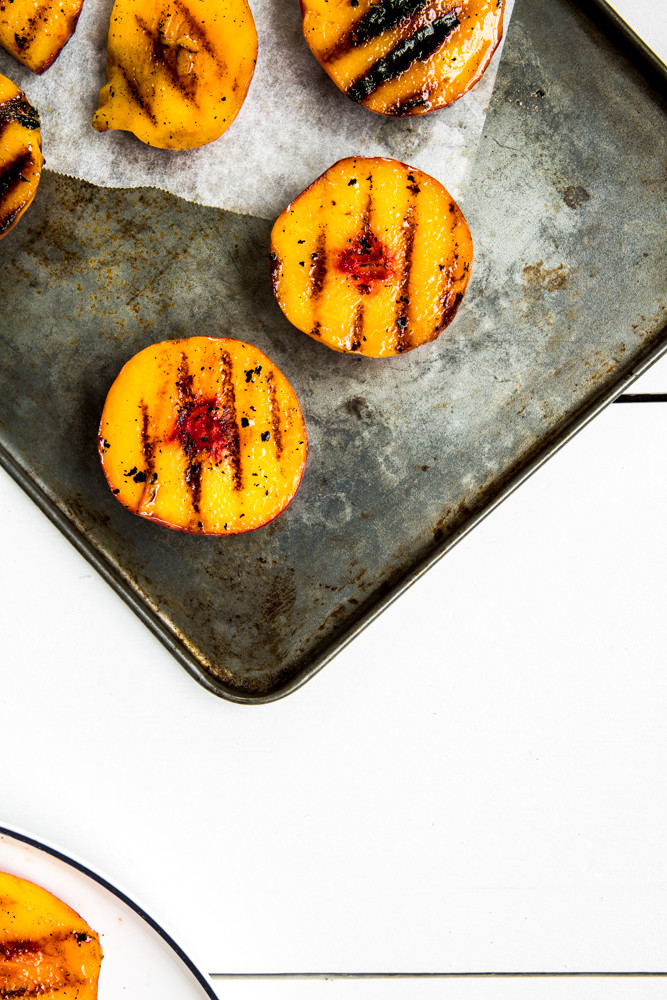 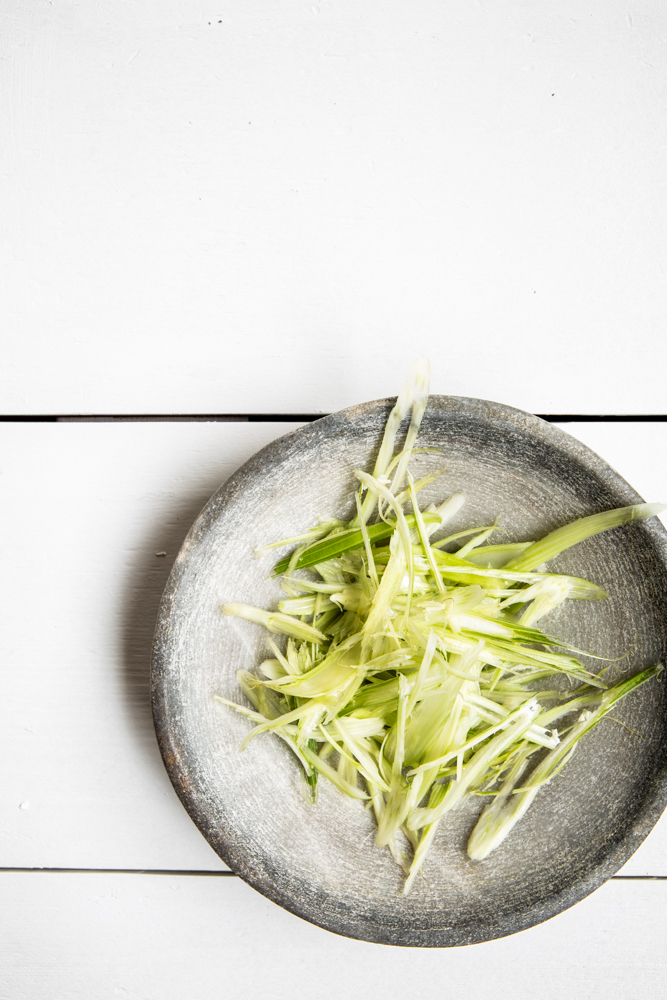 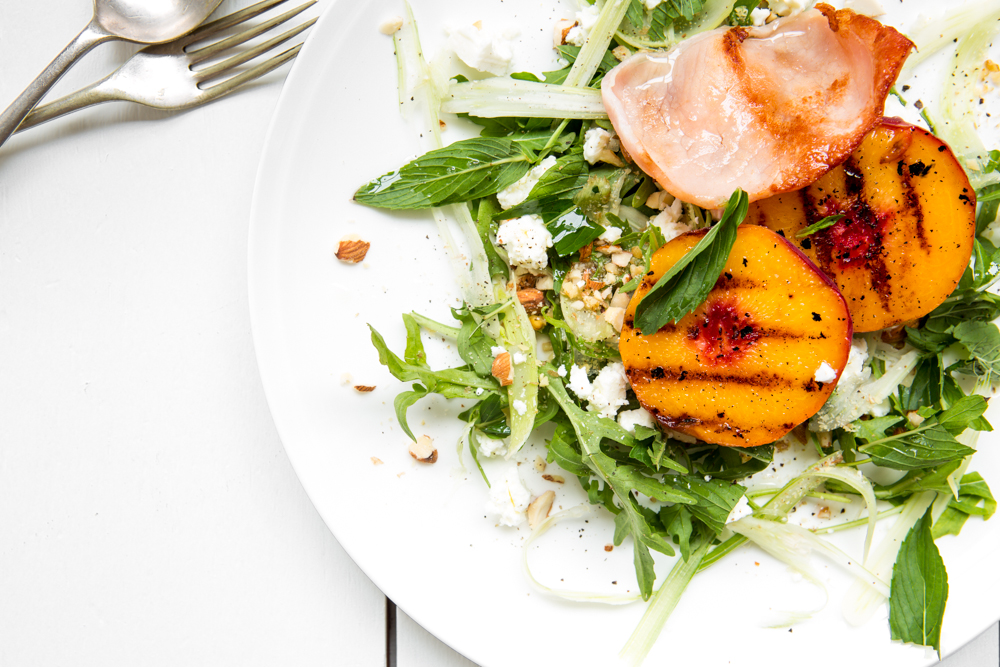 So after that science lesson (don't you feel so informed now though?!) I think you've earned yourself a delicious meal.

One of my favourite ways to enjoy bacon is to celebrate its' awesome saltiness and unique texture, by combining it with fresh, crisp greens, crunchy nuts & juicy fruit. This salad's play on hot and cold, soft and sharp is one of my favourites for summer and I think a great way to break down the rich (and glorious) fattiness of bacon. The highlights of fennel & mint are simply icing on the really, really good cake.

The hero of this dish to me however is the insanely delicious peach; a summer classic in Australia. Cheap and readily available right now, I dare you to resist consuming the entire peach once grilled before it even makes it to the plate!

You know how much I love raw food, so for me to say this it really must be out of this world. It's also the reason as to why I cook with butter in this recipe and I urge you to do the same. As well as going further than oil in many cases, it provides a delicious caramelisation as it brings out the fruit's natural sugars that would be impossible to recreate without adding sugar.

Grilled Peach, Fennel & Bacon Salad
Print
Prep time
10 mins
Cook time
10 mins
Total time
20 mins
yield: 1
Ingredients
Instructions
Notes
This recipe is possible without a griddle pan, though note that there will be no grill marks on the fruit.
3.2.2925 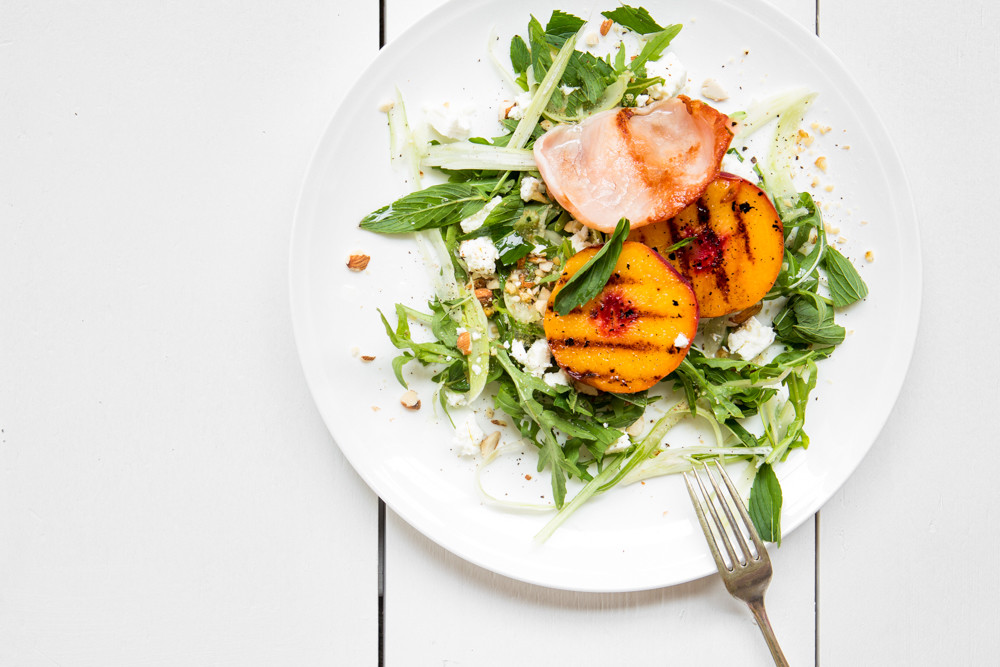 I just know you're going to love this recipe and if so, please share it far and wide so that not only can everyone enjoy the recipe, though they too can learn more about bacon and its' production for our health.